In later Greek mythology, Hecate (or Hekate; Greek Ἑκάτη , Εκάτη , Hekátē) was scarcely more than the goddess of witchcraft and sorcery. She was not usually portrayed at all, though she was described as having three heads: one dog, one serpent and one horse. She had a special role at three-way crossroads, where the Greeks set poles with masks of each of her heads facing different directions: Roman mythology also saw her as the goddess of the Trivia "the three ways", a folk belief, whether Celtic or Roman, that survived into the 7th century AD among the pagans of Flanders. There Eligius was wont to remind his recently converted flock "No Christian should make or render any devotion to the gods of the trivium, where three roads meet, to the fanes or the rocks, or springs or groves or corners" (for details, see Druidry).


Hekate was never incorporated among the Olympian gods. She remained a goddess of women's religion, a help in childbirth. In late imagery she also has two ghostly dogs as servants by her side. In the magical papyri of Ptolemaic Egypt, she is called the Bitch and the She-Wolf, and her presence is signified by the barking of dogs.


A version of Hecate has been appropriated by Wicca and other modern magic-practising religions.


In the earliest records of her, Hecate bears little resemblance to the night-walking crone. Hesiod records that she was among the offspring of Gaia and Uranus, the Earth and Sky. In Theogony he ascribed to Hecate such wide-ranging and fundamental powers, that it is hard to resist seeing such a deity as a figuration of the Great Goddess, though as a good Olympian Hesiod ascribes her powers as the "gift" of Zeus:


"Hecate whom Zeus the son of Cronos honoured above all. He gave her splendid gifts, to have a share of the earth and the unfruitful sea. She received honour also in starry heaven, and is honoured exceedingly by the deathless gods.... The son of Cronos did her no wrong nor took anything away of all that was her portion among the former Titan gods: but she holds, as the division was at the first from the beginning, privilege both in earth, and in heaven, and in sea".


Her gifts towards mankind are all-encompassing, Hesiod tells:


"Whom she will she greatly aids and advances: she sits by worshipful kings in judgement, and in the assembly whom she will is distinguished among the people. And when men arm themselves for the battle that destroys men, then the goddess is at hand to give victory and grant glory readily to whom she will. Good is she also when men contend at the games, for there too the goddess is with them and profits them: and he who by might and strength gets the victory wins the rich prize easily with joy, and brings glory to his parents. And she is good to stand by horsemen, whom she will: and to those whose business is in the grey discomfortable sea, and who pray to Hecate and the loud-crashing Earth-Shaker, easily the glorious goddess gives great catch, and easily she takes it away as soon as seen, if so she will. She is good in the byre with Hermes to increase the stock. The droves of kine and wide herds of goats and flocks of fleecy sheep, if she will, she increases from a few, or makes many to be less".


"For to this day, whenever any one of men on earth offers rich sacrifices and prays for favour according to custom, he calls upon Hecate. Great honour comes full easily to him whose prayers the goddess receives favourably, and she bestows wealth upon him; for the power surely is with her".


Hesiod emphasizes that Hecate was an only child, the daughter of Asteria, a star-goddess who was the sister of Leto, (the mother of Artemis and Apollo). Grandmother of the three cousins was Phoebe the ancient Titaness who personified the moon. Hecate was a reappearance of Phoebe, a moon goddess herself, who appeared in the dark of the moon.

Her power resembles that of sorcery, for Medea, who was a priestess of Hecate, used witchcraft, apparently under the guidance of the goddess, in order to handle magic herbs and poisons with skill, and to be able to stay the course of rivers, or check the paths of the stars and the moon.

Yet Hecate has been called tender-hearted, probably because she was concerned with the disappearance of Persephone, and addressed Demeter with sweet words when the goddess was distressed. 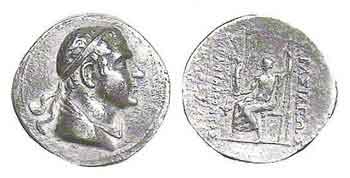 Silver tetradrachm of Pantaleon. [Source]
Obv: Bust of king Pantaleon with diadem.
Rev: Zeus seated on a throne, with scepter in left hand and, on extended right hand, a statue of Hecate holding two torches.


In modern days, Wiccan followers of Hecate associate several symbols and objects with her.


Wicca represents Hecate as carrying torches, very often has a knife, and may appear holding a rope, a key, a phial, flowers or a pomegranate. The Greek cross is also a symbol of Hecate at the crossroads.

The torch is obviously a symbol of the light that illuminates the darkness. Her knife represents her role as midwife in cutting the umbilical cord (possibly symbolized by the rope), as well as severing the link between the body and spirit at death, and may be the origin of the athame of Wicca. The Key is significant to the Mysteries, as is the pomegranate, the fruit of the Underworld eaten by Persephone, which bound her to Hades. 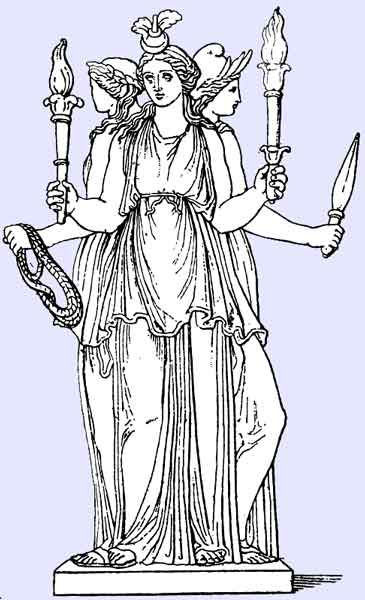 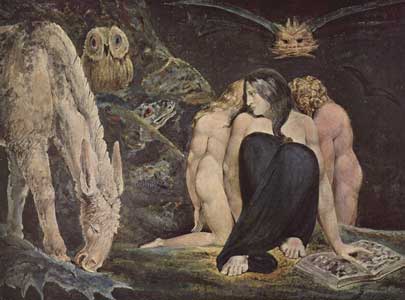 
In wicca, all wild animals are sacred to Hecate. Creatures of darkness, such as ravens, owls, snakes and dragons, are most sacred to her. Several images of Hecate show her holding a snake. Snakes have long been connected with chthonic powers and the uncommon wisdom of the Other world. The dog is the animal most commonly associated with Hecate. She was sometimes called the 'Black she dog' and black dogs were once sacrificed to her in purification rituals. At Colophon in Thrace, Hecate might be manifest as a dog. The sound of barking dogs was the first sign of her approach in Greek and Roman literature. The frog, significantly a creature that can cross between two elements, is also sacred to Hecate and the Egyptian goddess Hekat. A triple goddess, she sometimes appears three headed as dog, horse and bear or dog, snake and lion.


The yew, cypress, hazel, black poplar and willow are all sacred to Hecate. The leaves of the black poplar are dark on one side and light on the other, symbolizing the boundary between the worlds. The yew has long been associated with the Underworld.

The yew has strong associations with death as well as rebirth. A poison prepared from the seeds was used on arrows, and yew wood was commonly used to make bows and dagger hilts. The potion in Hecate's cauldron contains 'slips of yew'. Yew berries carry Hecate's power, and can bring wisdom or death. The seeds are highly poisonous, but the fleshy, coral-colored 'berry' surrounding it is not. If prepared correctly, the berry can cause visual hallucinations.

Many other herbs and plants are associated with Hecate, including garlic, almonds, lavender, myrrh, mugwort, cardamon, mint, dandelion, hellebore, and lesser celandine. Several poisons and hallucinogens are linked to Hecate, including belladonna, hemlock, mandrake, aconite (known as hecateis), and opium poppy.


Hecate was worshipped by both the Greeks and the Romans who had their own festivals dedicated to her. According to Ruickbie (2004:19) the Greeks observed two sacred days, one on the 13th of August and one on the 30th of November, whilst the Romans observed the 29th of every month as her sacred day.